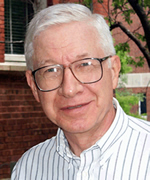 I am sad to relate that Professor of Chemistry Douglas Einar Applequist, 85, died at his home in Champaign, Illinois, on Saturday, January 30, 2016.  Prof. Applequist was born October 29, 1930, in Salt Lake City, Utah, son of Einar Isidor and Margaret McCune (Musser) Applequist.  As a child he moved with his parents and his two brothers Jon and Reid to Berkeley, California, where his father was employed as a linotype operator for the university there.  He received his BS degree in chemistry from the University of California at Berkeley in 1952, graduating as salutatorian of his class.  He carried out doctoral work under the direction of Prof. John D. Roberts, first at MIT and then at the California Institute of Technology, where he received a PhD in 1955 for a thesis titled “Methylenecyclobutane and Related Substances.”   He then joined the faculty of the Chemistry Department at the University of Illinois at Urbana-Champaign. His initial appointment was as an instructor, but he was promoted to assistant professor in 1956, to associate professor in 1961, and shortly thereafter to full professor.

Prof. Applequist’s research interests were in physical-organic chemistry, with an emphasis on mechanistic problems in the reactions of small-ring compounds.  One of his earliest achievements at Illinois was an improved synthesis of spiropentane through the recognition that the zinc ions generated in the reduction step were catalyzing an unwanted rearrangement reaction. This discovery led to a lengthy series of elegant papers on the chemistry of small ring spiroalkyl cations and the preparation of the previously unknown molecule 1-methylcyclopropene.  In an investigation of the stereochemistry of the Hunsdiecker reaction (the brominative decarboxylation of silver carboxylates) on cyclopropane rings, he showed that cyclopropyl free radicals behave like unstrained free radicals despite the change in hybridization.  He also carried out a detailed analysis of the stabilities of the 1-adamantyl, 1-bicyclo[2.2.2]octyI, and t-butyl radicals, which provided quantitative data that many others have used to good effect.  He was adept at combining data from NMR spectroscopy, solvolysis rates, acidity constants, and heats of hydrogenation to assess changes in bonding during chemical reactions.  Among other topics studied in his laboratories were the chemistry of diazoalkanes, alkyllithium reagents, and the anthracene photodimer.

Prof. Applequist was not a prolific author (he wrote 50 papers over his career), but he always prided himself on publishing high-quality comprehensive papers; nearly all of his publications were in JACS and many were very highly cited.  He was a Fellow of the Sloan Foundation in 1957, and a Sloan Visiting Professor of Chemistry at Harvard in 1964 (at the invitation of his former Illinois colleague E. J. Corey). At Harvard, his course on small ring compounds was highly influential on Roald Hoffmann’s thinking about the theory of electrocyclic reactions that ultimately became formulated as the “Woodward-Hoffmann Rules.” He was co-author with Charles DePuy and Ken Rinehart on the third (1982) edition of the textbook Introduction to Organic Chemistry, which was also translated into Russian.  He was a consultant for the DuPont Company, and served on the editorial boards of both the Journal of Organic Chemistry and the Journal of the American Chemical Society (and was one of the youngest chemists ever to be engaged for all three of these distinctions).  He became emeritus professor in 1986. He married Linda Donlon in 1966, and they had two children, Wendy and Jenny.

On a more personal note, current Illinois faculty who were colleagues of Prof. Applequist recall him as a rather formal, reserved, and gentle person, with an elegant manner, but one who had strong beliefs and an unwavering interest in the research niche that he had carved for himself and that he dominated. He was an excellent teacher and research advisor, and although he was not quick to offer unsolicited advice, if asked he would always give a straight and helpful answer.  Prof. Peter Beak has stated “Doug had a major influence on the direction of my research. Although I was trained as a natural products chemist I was inclined more naturally toward physical organic. That was reinforced in part because I sat in on the graduate course Doug taught for first year students.”  Peter also noted that in those days the organic faculty met seven days a week over morning coffee for lively discussions, in which Prof. Applequist played a key part.  The discussions, and the interplay of differences of opinion, were great opportunities to learn from a remarkable group of world-class tutors.  Prof. Corey said of Doug: “We have all suffered an enormous loss. Truly admirable people like Doug are rare and we are all diminished with their passing. I will never forget Doug and his many wonderful qualities. It was a great gift for me just to know him and enjoy his friendship. I shall cherish him and many fine memories.”