12/22/22
From left, undergraduate student Idalee Johnson Rosas, and graduate students Angela Thomas and Marya Ornelas collaborated in the Mehta lab on research targeting an enzyme that is essential to RNA viruses.

The COVID-19 pandemic has been one of the most significant and widespread ribonucleic acid (RNA) virus-related outbreaks ever, accounting for more than 470 million infections and more than 6 million deaths worldwide so far. But it is not the only one.

These threats to world health and the threat of newly emerging RNA virus-related outbreaks emphasize the need to develop new broad-spectrum antiviral medications and vaccines applicable to these viruses, which also cause the common cold, influenza, Dengue Virus, West Nile fever, mumps, measles and more.

Researchers in the lab of Illinois chemistry professor Angad P. Mehta, T. M. Balthazor Faculty Scholar, have developed a synthetic biological system, or platform, that can be rapidly modified for the purpose of developing antiviral therapeutics for a variety of RNA viruses. It could also impact future vaccine development. They describe their work in a recently published paper, “Synthetic Platforms for Characterizing and Targeting of SARS-CoV-2 Genome Capping Enzymes,” in the journal, ACS Synthetic Biology.

Their platform targets a mechanism that is highly conserved among these types of viruses – a disguise that enables them to go undetected as they invade the host cells and begin multiplying.

Graduate student and study co-author Marya Ornelas said there are several viral replication pathways that are common among these viruses and could be targeted for development of antivirals or vaccines, and this capping mechanism is one of them.

“And by capping, I mean there are chemical modifications done to one end of the genome that makes the viral RNA more stable in the cell. This prevents the host cell from recognizing the viral RNA as foreign, and elicit an immune response against it,” Ornelas said. “So that’s one of the pathways that’s highly conserved (identical) across many viruses. Without genome capping, the viruses can’t propagate.”

When Mehta initially envisioned this project, the MERS-CoV outbreak was in the forefront. But that changed in 2019 with the COVID-19 pandemic, and Mehta applied for and received a National Science Foundation RAPID grant to launch this project.

“We literally started this project two months into the pandemic when the genome sequence of SARS-CoV-2 was out,” Mehta said.

The timing was perfect for Ornelas, who was set to begin the chemistry PhD program at Illinois in Fall 2020 and was interested in this type of research. Through a predoctoral program, she was able to dive into the research that summer.

“That is what I wanted to work on in the lab. I wanted to build synthetic biology platforms for emerging pathogenic viruses as well as bacteria,” Ornelas said.

To achieve their goal of unmasking the disguised genome in these viruses, the research team focused on a key enzyme – a nonstructural protein known as nsp14 that is involved in the synthesis of the virus cap structure. The researchers began by taking enzymes from pathogenic RNA viruses and putting them in yeast where they could safely study them.

The researchers used the synthetic, yeast-based platform they developed – called YeRCoM – to characterize the enzymes on a molecular level and then make various mutations in the enzymes to see how they affect growth.

“So, we made a bunch of different mutations and truncations of the enzyme to really understand what parts of the enzyme were doing what,” Ornelas said.

From this, researchers were able to identify important domains and residues that are essential for nsp14 enzyme activity in SARS-CoV-2 and in variants like Delta, revealing them as potential targets for development of therapeutic strategies.

Researchers then coupled their platform with directed evolution – a lab procedure that uses molecular insights to speed up development of the enzyme to reveal variations of the enzyme that make it “work worse,” which has been shown to result in a significant weakening of coronaviruses that could lead to development of live vaccine candidates.

The researchers believe the modular design of their platform will make it easy to adapt to a range of emerging RNA viruses. Because the platform can be used in a standard laboratory setting, they anticipate this approach further increasing our understanding of the molecular mechanisms involved in capping of the viral RNA genome and accelerating development of broad-spectrum antiviral and live attenuated vaccine candidates.

“Many labs could take the platform we developed and do these important experiments,” said Ornelas, who is a third-year PhD student and won first prize for her presentation of this work at the annual Beak-Pines Organic Area Allerton Conference in Fall 2022.

These capping enzymes have been targets of antiviral drug discovery efforts previously, but those methods are not conducive to high-throughput screening – testing large numbers of chemical or biological compounds to find a specific target.

This platform developed in the Mehta lab is compatible with high-throughput screening, and that’s one of the advantages, Ornelas explained.

Another researcher in the Mehta lab is currently working with a high-throughput screening facility to develop specific methods for identifying small molecules that could potentially inhibit these enzymes.

Ornelas and the co-authors of this paper, Angela Thomas, a second-year graduate student in the Mehta lab, and Idalee Johnson Rosas, an undergraduate researcher in the lab, are already working on a follow up paper where they are expanding this platform to other pathogenic viruses, including Monkeypox, MERS, and African Swine Fever. And they also plan to explore the two other enzymes involved in the capping of the viral genome.

Thomas, who primarily focused on the biochemical characterization in developing this platform, said this experience has heightened her interest in this type of research.

“It’s never the same routine from day to day. There is always something different,” Thomas said.

Rosas got involved in this project through the C2 – Chemical Science through Community program, which matches undergraduate students interested in research with graduate student mentors. Her work focused on determining mutations that would attenuate the activity of the enzyme.

“It’s been great working over the summer on this project,” Rosas said. “I see how things I learn in class relate to real life projects that I could be working on. It has been fun and exciting when you work on things and they end up becoming successful and promising.” 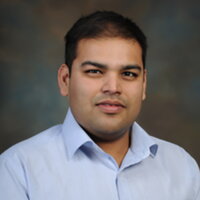