Peter Senter joined Seattle Genetics in August 1998 and now serves as Vice President of Chemistry. His group carries out 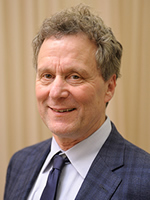 research in anticancer drug design, antibody-drug conjugate technologies for cancer therapy, and protein glycoengineering. Several of the molecules generated in Dr. Senter’s lab have entered clinical trials, and two of them have been approved: Adcetris for relapsed Hodgkin lymphoma and certain non-Hodgkin lymphoma, and Etopophos for solid tumor therapy. Dr. Senter has authored more than 150 scientific publications and holds more than 40 issued patents. He received an AB in Biochemistry from the University of California, Berkeley, a PhD in Chemistry from the University of Illinois, and did postdoctoral research at the Max Planck Institute of Experimental Medicine in Göttingen, Germany. He is the Senior Editor of Molecular Cancer Therapeutics, on the Editorial Advisory Boards of several other journals, and serves as an Affiliate Professors at the University of Washington Department of Bioengineering and the University of Southern California School of Pharmacy.

After graduation, Dr. Balthazor joined Monsanto as a bench scientist. He assumed a number of scientific, leadership and strategic analysis roles over the next quarter century and retired as Vice President and Director of Research. His personal research and that of his research department provided numerous commercial opportunities for Monsanto ranging from new active ingredients, novel genes and new processes for the manufacture of glyphosate (the active ingredient in Roundup® herbicide). The process chemistry breakthroughs allowed what was hitherto a specialty product to become the most successful agricultural product in the industry. In addition, Dr. Balthazor isolated the first microorganisms capable of biodegrading glyphosate. Beyond the safety and environmental impact of this discovery, such organisms were the initial source of genes in the development of the first example of herbicide tolerant transgenic plants utilized in modern agriculture (Roundup Ready®).

While at the U of I, he synthesized the first example of a chiral trigonal bypyramidal structure. His synthetic strategy utilized ring strain to prevent racemization via pseudorotation, ordinarily facile for such structures. He went on to define the mechanism of hydrolysis of such compounds based on extensive stereochemical and kinetic studies. Throughout his career he focused much of his efforts on the chemistry of sulfur, phosphorus and iodine.

Monsanto at Dr. Balthazor’s urging provided the initial financial support for the Beak- Pines Conference and the Balthazor-Senter Symposium on Frontiers in Organic Chemistry at UIUC. He has since established endowments in support of these conferences as well as a fund directed at supporting new faculty (T. M. Balthazor Scholar). Endowments supporting scholarships have also been created at his undergraduate alma mater.