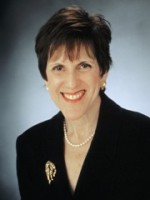 Madeleine Jacobs is Executive Director and Chief Executive Officer of the American Chemical Society (ACS), the world’s largest scientific society, with more than 160,000 members worldwide. She assumed her post on January 1, 2004.

As Executive Director and CEO of the American Chemical Society, Jacobs has worked closely with the society’s 1,900 employees and the ACS Board of Directors to help reinvent ACS and prepare it to serve its members and the chemical profession during a time of radical change in the chemical enterprise. She is working closely with other organizations around the world to enhance ACS collaboration in the chemical sciences.

In 2006, the ACS will have revenues of about $450 million and it manages approximately $1.4 billion in assets, including $560 million in the Petroleum Research Fund. PRF distributes between $20 million and $25 million a year in peer-reviewed research grants, making it one of the largest private philanthropies devoted to chemical research. ACS publishes 35 scientific journals through its Publications Division and numerous scientific literature and patent databases through the Chemical Abstracts Service Division.

Prior to her selection by the ACS Board of Directors as Executive Director and CEO, Jacobs served for eight and a half years as Editor-in-Chief of Chemical & Engineering News magazine, the weekly newsmagazine of the chemical world published by ACS, and two years as Managing Editor. She has held other senior management positions in a wide variety of scientific and educational organizations including the National Institutes of Health, the National Institute of Standards and Technology, and the Smithsonian Institution, where she served as the director of Public Affairs at the world’s largest museum complex.

Major honors include the Smithsonian Institution Secretary’s Gold Medal (1993), the New York Academy of Sciences Women History Month Award (2001), the 75th Canadian Society for Chemistry Conference Lecturer (2002), the ACS Award for Encouraging Women into Careers in the Chemical Sciences (2003), and the American Crystallographic Association Public Service Award (2004). A much-honored science journalist, she has also received more than three dozen awards for outstanding science writing from national organizations. She is a Fellow of the American Association for the Advancement of Science and a member of the Board of Directors of the American Chemical Society and the Council for the Advancement of Science Writing. She is also a member of the Board of Governors of the New York Academy of Sciences.

Jacobs' professional interests include trends in the chemical industry, the public image of chemistry, employment trends, minority representation, and gender equality of scientists. She has given speeches on these topics for more than 30 years and is a sought-after speaker.