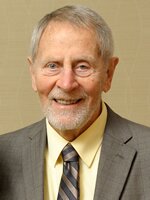 Theodore Brown is Professor Emeritus of Chemistry at the University of Illinois at Urbana Champaign, and Founding Director Emeritus of the Arnold and Mabel Beckman Institute. Dr. Brown received his Ph.D. from Michigan State University in 1956. He has been a faculty member in the UIUC Department of Chemistry since 1956 (he assumed emeritus status in January 1994). During 1980-1986 he served as Vice Chancellor for Research and Dean of the Graduate College. In 1987 he became the founding director of the Arnold and Mabel Beckman Institute, and served in that role through 1993. The Beckman Institute at Illinois is among the largest and most broadly-based interdisciplinary research institutions in the world. Brown also served as interim Vice-chancellor for Academic Affairs during 1993.

Among many board and committee activities, he was President of the Association of Graduate Schools of the AAU universities during 1985-86. He was a member of the National Academies Government-University-Industry Research Roundtable during 1989-1994; American Chemical Society (ACS) Governing Board for Chemical Abstracts Services, 1991-1996; ACS Governing Board for Publishing, 1996-2004.

During 2003-2005 he co-chaired a National Academies committee under the auspices of the Committee on Science, Engineering and Public Policy, on Facilitating Interdisciplinary Research. He was a member of the Board of Directors of the Arnold and Mabel Beckman Foundation during 1994 - 2008 .

Professor Brown's current interests are in the cognitive, philosophical and social aspects of the scientific enterprise. In 2003 he authored Making Truth: Metaphor in Science (http://www.press.uillinois.edu/s03/brown.html), which explores the essential roles of metaphorical reasoning in science. He has also written on the authority and moral authority of science in society: Imperfect Oracle: The Authority and Moral Authority of Science in Society, was published in 2009 by Pennsylvania State University Press. A book on the origins of the Beckman Institute, Bridging Divides, was published in 2009 by the University of Illinois Press.  He is a subject editor for chemistry of the New Scribner's Dictionary of Scientific Biography, and continues as coauthor of the best-selling general chemistry text, Chemistry: The Central Science, now in its 14th edition.

Brown's fields of research interests were inorganic and organometallic chemistry, with an emphasis on the kinetics and mechanisms of reactions. He and his students were the first to elucidate the solution and gas phase structures of organolithium compounds, and the dynamics of intermolecular exchanges in main group organometallics. In the field of transition metal organometallics, his group discovered the first examples of radical chain substitution and stereospecific cis substitution reactions in metal carbonyls. His group also led in the development and use of nuclear quadrupole double resonance methods. Seventy Ph.D. candidates completed their thesis researches under his mentorship, and nearly thirty postdoctoral research associates worked in his laboratories. Brown’s current interests are in the cognitive, philosophical and social aspects of the scientific enterprise. In 2015 the Beckman Foundation provided the funds for support of several postdoctoral fellows at the Beckman Institute at the University of Illinois, and established the annual Beckman-Brown lecture in Interdisciplinary Science.