01/19/23
Professor Ben Snyder in his new office on the Illinois campus.

As the newest member of the faculty in the Department of Chemistry, Ben Snyder has settled into his new office in the Chemical and Life Sciences Laboratory on the Illinois campus where he is launching his independent research career in the areas of inorganic, physical and materials chemistry.

Previously an Arnold O. Beckman Postdoctoral Fellow at UC Berkeley, Snyder officially joined the faculty at Illinois in January, and in the same month, he is celebrating the publication of a paper in Nature, detailing a research project that could lead to a “greener” way of producing ammonia.

Now, the Connecticut native who spent the last 10 years on the West Coast is busy building his research group and lab at Illinois, where his primary goal is to develop spectroscopically-guided synthetic approaches to installing well-defined, molecular active sites in porous materials.

“I am super excited to be here and looking forward to starting my independent career and this is the perfect place for me to do that,” said Snyder, who holds a BS in chemistry and a BA in mathematics from the University of Rochester and received his PhD from Stanford University in 2018, where he was a National Science Foundation Graduate Fellow and Stanford Graduate Fellow.

What is appealing at Illinois, Snyder said, is the huge amount of expertise among faculty in chemistry and other areas like chemical engineering and materials science, which are all complementary to his areas of expertise and research.

“While I have my own niche to fill here, there is a lot of mutual appreciation for the things other faculty members are doing, and I think they are excited to see someone with my skillset here. I think the people here are just great,” said Snyder, who has four students in his research group so far. “Being able to work with them is exciting. I’ve been super impressed with them. They are very smart and acting independently. And they all enjoy each other’s company, which is just great.”

Snyder said he received his first chemistry book at six years old when his first-grade teacher realized his interest in the subject.

“I was always very much into scientific thinking. And when I was in college, for me it was kind of between math and chemistry. Ultimately, chemistry always had the edge for me, because it has this tangible element where you can go into the lab and work with your hands. And for me, that was always satisfying,” Snyder said.

His recently published postdoctoral paper details the chemistry behind the development of a porous material – a metal organic framework – that can very efficiently capture large amounts of ammonia and separate it from reactants. The research presents a broad strategy for a more environmentally friendly way of making ammonia by reducing the overall amount of energy currently required in producing this chemical that is widely used in agriculture and industry.

Snyder explained that unlike typical porous materials that remain static while adsorbing gases, this porous three-dimensional material undergoes a dramatic structural transformation as it binds to the ammonia. It unravels into a bundle of one-dimensional strands, like fabric unraveling into individual threads. When heat is applied to remove the ammonia, the structural transformation reverses and the material returns to its original structure. The material can efficiently capture, release and re-capture ammonia, over and over.

Snyder said he considers himself more of an instrumentalist than a synthetic chemist.

“A big motivation for me – especially when it came to my PhD – was getting to work with all this amazing spectroscopic equipment and being trusted to tune the knobs on something that’s worth as much as a house,” he said. “I now have the spectroscopic tools which I helped develop in my Phd, and now I want to see what I can do with them coupled to the synthetic side of things.” 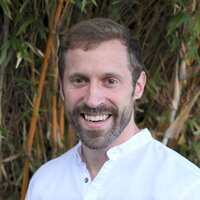