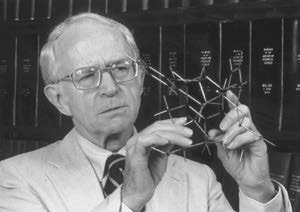 Kenneth L. Rinehart was born on March 17, 1929, in Chillicothe, Missouri. He earned a BS degree in chemistry in 1950 from Yale University and a PhD in chemistry in 1954 from the University of California at Berkeley. In between, he spent a year of study as a Rotary Fellow at the University of Göttingen in Germany. Professor Rinehart joined the faculty at the University of Illinois at Urbana-Champaign as an instructor in organic chemistry in 1954. After a long and successful career at Illinois, he retired in September 2000. During his career, he supervised, inspired and collaborated with 130 PhD students, 120 postdoctoral associates, and 60 undergraduate chemistry majors, as well as a stream of visiting scientists from around the world. He died on June 13, 2005 in Urbana, Illinois. He is survived by his wife, Marlyn; three sons, Kenneth III, John, and Nicholas; and two grandsons.

Professor Rinehart was internationally recognized as a pioneer in chemical biology through his investigations of organic compounds with biological activity. His research led to the development of a procedure involving mutasynthesis to prepare new antibiotics. He also led the Illinois chemistry department’s marine natural products program that collected samples from the ocean floor in the mangroves near the coast of Puerto Rico and elsewhere. In 1990, Professor Rinehart isolated several natural sea squirt extracts that showed promise as anti-cancer agents. One of the extracts, ecteinasciden (ET-743), has repeatedly worked safely and effectively in animal studies and through three stages of human clinical trials against soft-tissue sarcomas and lung, breast, and ovarian cancers. Professor Rinehart identified ecteinasciden in his Illinois laboratory. The university licensed the rights to the compound to the Spanish company PharmaMar SA for production purposes.

Professor Rinehart served on the editorial boards of several journals, including the Journal of Antibiotics, the Journal of Medicinal Chemistry, and the Journal of Natural Products. He also served on the Chemistry Advisory Committee of the Walter Reed Army Institute of Research (1971-75), the Chemical and Biological Information Handling Panel of the National Institutes of Health (1969-1974), and the Executive Committee of the American Chemical Society’s Division of Organic Chemistry (1968-1970). Professor Rinehart was elected as a fellow of the American Association for the Advancement of Science in 1980. He also was a Sloan Fellow and Guggenheim Fellow. He received the Ernest Guenther Award in the Chemistry of Natural Products in 1996 from the American Chemical Society.

The Rinehart Lectures in Chemical Biology were established at the University of Illinois in 2008 in honor of Professor Rinehart’s many contributions to the department and to the discipline of chemical biology.