G. Frederick Smith was Professor of Chemistry at the University of Illinois from 1921 until his death in 1976. Professor Smith, one 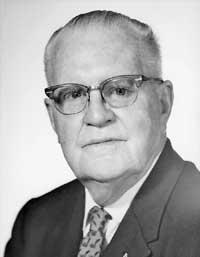 of the most colorful chemists of the century, was a man of enormous vitality, who devoted himself to analytical chemistry in teaching, research, and business. Smith authored 173 papers, 25 of which reported work done after his retirement. He is most famous for championing the use of perchloric acid as an analytical reagent, and his efforts in cerate oxidimetry are also noteworthy. In addition, he (together with Charles Goetz) developed the use of nitrous oxide as a propellant for whipped cream, the first spray product in a pressurized can ever marketed. He and his brothers founded the G. Frederick Smith Chemical Company, known today as GFS Chemicals, Inc. It still operates in Ohio, and is the largest manufacturer of perchlorates, for uses other than rocket propulsion or explosives, in the world. It is through the generosity of Smith's descendants, via GFS, Inc. and the Delaware County Foundation, that this lectureship is supported.

Professor Smith was generous and warm hearted, loved by his students and associates and honored by chemists everywhere. While he regarded himself as a university man, and his enthusiasm for teaching was infectious, he worked closely with colleagues in industry, understanding and solving their problems. For a complete and accessible scientific biography by a friend and close co-worker, one which brings Professor Smith and his work to life, see H. Diehl, "G. Frederick Smith," Talanta 13, 867-883 (1966).