In 1916, St. Elmo Brady became the first African American in the United States to obtain a PhD in Chemistry at the University of Illinois, where he conducted research in Noyes Laboratory.

Born on Dec. 22, 1884, in Louisville, Kentucky, Brady graduated from Louisville Colored High School in 1903 and went on to Fisk University, an all-black college in Nashville, Tennessee. There he was encouraged to study chemistry by his teacher, Thomas W. Talley, a pioneer in the teaching of science.

Brady graduated with a bachelor’s degree in 1908 and took a teaching position at Tuskegee Normal and Industrial Institute (now Tuskegee University) in Alabama. After four years teaching at Tuskegee, he took a leave of absence and began at Illinois in the summer session of 1913.

Many years later, Brady told his students that when he went to graduate school, "they began with 20 whites and one other and ended, in 1916 with six whites and one other." A documentary titled "Twenty Whites & One 'Other'" tells the life story of Brady. Created and produced by the University of Illinois at Urbana-Champaign, the documentary won a Silver Telly Award for 2020 in the category, “Non-broadcast—General History.”

At Illinois, Brady completed his Master of Science in Chemistry in 1914 and continued his studies under Professor Clarence G. Derick, completing his PhD two years later, with a dissertation titled "The Divalent Oxygen Atom." The primary focus of Brady's research was to settle a scientific disagreement between his advisor and Harvard University chemist Arthur Michael, who disagreed on how the acidity of carboxylic acids was affected by replacing hydrogen atoms on the carbon chain with other chemical groups. Brady’s research resulted in a number of firsts and supported Derick’s view.

Brady published three scholarly abstracts with Derick in Science between 1914 and 1915 and also collaborated with Professor George Beal on a paper titled “The Hydrochloride Method for the Determination of Alkaloids,” published in the Journal of Industrial and Engineering Chemistry.

During his graduate studies, Brady also became the first African American admitted to Phi Lambda Upsilon, the chemistry honor society (1914) and was one of the first to be inducted into Sigma Xi, the science honorary (1915). In November 1916, The Crisis -- monthly magazine of the NAACP -- selected Brady for its biographical sketch as "Man of the Month".

Despite better financial opportunities for chemists in private industry, Brady returned to Tuskegee University, and there he began his legacy of building chemistry programs in Historically Black Colleges and Universities, including Tuskegee (1916-1920), Howard University in Washington DC (1920-27), Fisk University (1927-52), and Tougaloo College, following his retirement from Fisk. His work included establishment of strong undergraduate curricula, graduate programs, and fund-raising development at these institutions. 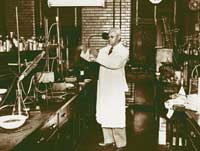 In 2019, the American Chemical Society (ACS) honored Brady with a National Historic Chemical Landmark at an all-day event in Noyes Laboratory on the UIUC campus. The signature event was the dedication ceremony for the ACS National Historic Chemical Landmark, during which Peter K. Dorhout (BS, ’85), immediate past president of ACS, presented the university with a bronze plaque to be mounted outside of 100 Noyes Laboratory.

A new paper published in 2021 in the Bulletin for the History of Chemistry describes a significant amount of new information about the life and accomplishments of Brady. Vera V. Mainz, secretary/treasurer of the American Chemical Society Division of the History of Chemistry co-authored the paper along with Dean F. Martin, professor of chemistry at the University of South Florida, and Greg Girolami, professor of chemistry at Illinois.

The authors hope that the new information about St. Elmo Brady's ancestry, personal life, education and career “will help to bring St. Elmo Brady into sharper focus and greater recognition.”